What is Craniosacral Therapy?

Craniosacral Therapy (CST) is a powerful yet subtle bodywork that functions directly on the central nervous system. Following the craniosacral rhythm (CSR) provides direct communication with the central nervous system that allows us a unique insight into the client’s needs. It assists relief and resolution of physical and emotional trauma. It also provides immediate and lasting relief from stress. Furthermore it helps us contemplate life from a place of detached compassion and wellbeing that offers insight, perspective and acceptance.

Initially we adjust the bones of the skull, spine and hips to restore correct nutrition and detoxification of the brain. Furthermore CST locates and releases trauma energy that has become stuck in the tissues causing ongoing problems. It also provides a deeply relaxed state in which things from the past often surface and resolve themselves effortlessly. Dialoguing is sometimes used to help the client gain a clearer connection with what is trying to arise from their subconscious.

Above all Craniosacral Therapy is a gentle form of bodywork, like a silent psychotherapy. Many clients say it is like being in a beautiful waking dream that resets them and leaves them feeling balanced and integrated. Even the few who claim to feel nothing exhibit deep sighs of relaxation and leave notably more relaxed and positive. 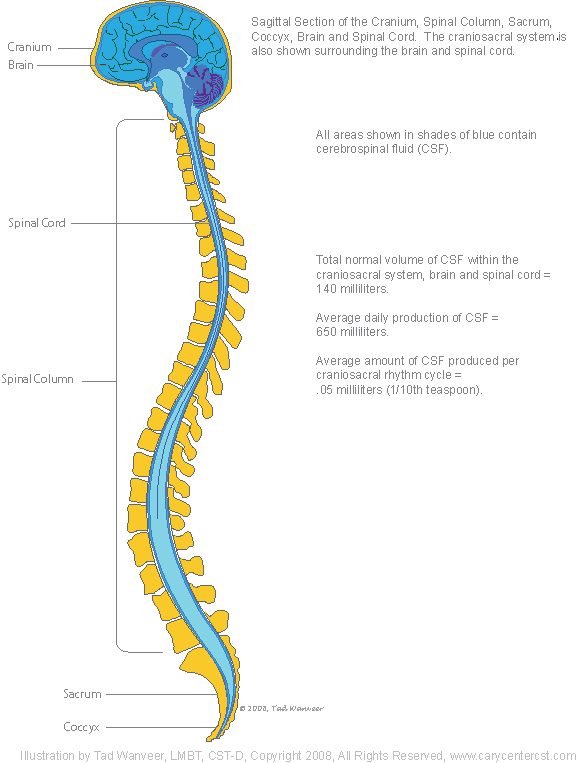 How Does Craniosacral Therapy Work?

The brain and spinal cord float in the cerebrospinal fluid surrounded by a balloon-like protective layer called the dura. This layer expands and contracts as the CS fluid is produced and released in a breath like action that provides nutrition, removes toxins and regulates pressure. When we have injury or trauma stuck in the tissues of the body it causes constrictions and misalignments of the spinal system that inhibit the functioning of the Craniosacral Rhythm (CSR). Consequently we can experience a whole array of symptoms and disorders. Injury of other areas of the body can also be addressed directly with CST.

A good example is an olympic high diver who was treated in every way possible for vertigo that stopped them being able to perform. Once every other method had failed they tried CST which located the cause to a knee injury. The injured tissue in the knee created a run of distortion in the fascia that spread all the way to the skull. This caused tightness in the intracranial membranes putting pressure on the area of the brain associated with balance. With some simple corrections the symptoms were relieved and the client was able to continue high diving.

CST works in harmony with the client’s body to relieve what they need most at that time, rather than what we or the client thinks they need. Many times the real cause of an issue is underlying and subtle. It allows us to go beyond appearances to deal with the root of our issues rather than focussing merely on symptom relief alone.

What Can I Expect During a Craniosacral Therapy Session?

The Client lays on their back in loose, comfortable clothing. The therapist places their hands lightly up the body at various points to read the CSR and makes the needed adjustments. There may be gentle movement of the limbs and head to facilitate unwinding of tension and release constrictions. CST focusses mainly around the spine, hips and head. A deep sense of relaxation soon occurs and often the client will fall into a light sleep-like state during which they are fully conscious of what is happening in the room.

It is common for forgotten memories and feelings to arise and insight and resolution to accompany them along with a sense of physical release and relief of associated discomfort. A session usually lasts 60-90 minutes. It may take a few minutes after to fully be present with the here and now again. Many clients remark that they wish they could remain in that state. I advise a short stroll afterwards to get fully grounded.

One client told me after a session that she’d had a memory of being a child in a store, her mother scolded her because she thought she was touching something she shouldn’t. The child was upset feeling it to be deeply unfair. As she remembered this she became aware she had never let go of that feeling. Consequently it had been a source of tension and unease for her ever since. In that moment of remembrance she felt a sense of acceptance and forgiveness and the tension fall away. As a result the area of the body that had been holding it relaxed for the first time since that event. This is a wonderful example of how CST can work.

We are full of these impressions that life has left within us. Most small and seemingly insignificant, some much bigger and carrying grave consequences. With every one that we resolve and let go of we reclaim more of our self from the past and become more integrated and present. Our energy is more abundant, our mind more focussed and our sense of being more fulfilling.

Craniosacral Therapy can also be used for pets and working animals. Although the skeletal system may be different the principles are the same. Animals can be far more open to the work since they have no expectation or disbelief to overcome. Results can often be dramatic as described in this story. Our pets are very sensitive and highly attuned to us. They can absorb our stresses and upsets as easily as they can attain a physical injury. CST can really help the wellbeing of your cat, dog or any other animal. Ask your practitioner for more details. 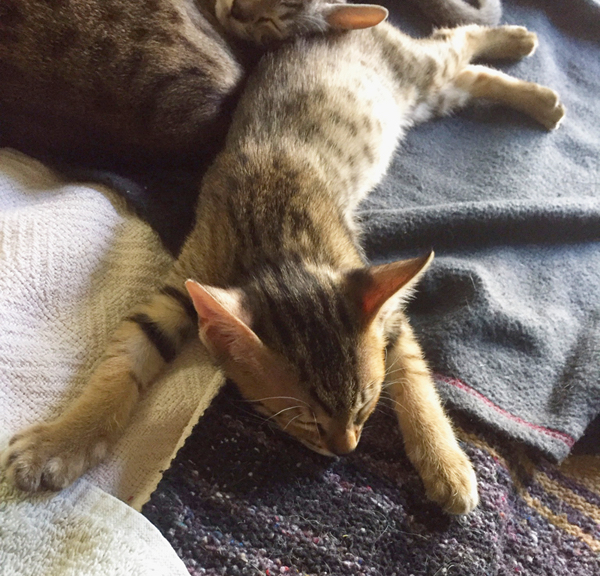 A kitten after Craniosacral Therapy.